How did Fethiye City get it’s name
Have you ever thought why places are given their name ?

He graduated from the Naval School of War in 1907 as a second lieutenant and was sent to Britain for aviation training.

Graduating from the Naval Academy he became an officer in the navy. He was trained as a pilot in the UK and then joined the Air Force as a captain in 1911.

He flew with his navigator Sadik Efendi in a Bleriot XI/B plane called Muavenet-i Milliye from Istanbul to Egypt on Febraury, 8th 1912. His plane unfortunatly crashed on February, 22nd 1912 between Damascus and Tiberias ( Sea of Galilee ) in the valley of Hell. The engine failed and the lane fell from the sky. 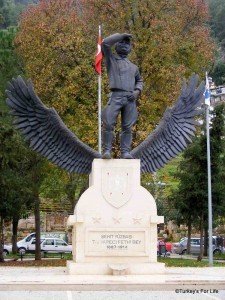 © Property in Turkey for Sale - Direct from the Developer